"CARisMA is the fusion between the talented classical guitarists Magdalena Kaltcheva and Carlo Corrieri. The duo is recognized for their outstanding arrangements and compositions as a result from their innovative way of playing the classical guitar. "

Making of "ALL THE WORLD`S A STAGE"

“There are magic instants when the beauty of the moment can only be perceived and told by ethereal and timeless sounds.”

The music of CARisMA, made of colorful embroidered arabesques and delicate arpeggios as soft as butterfly wings, can be the perfect sound track of those magic instants we call life. CARisMA seem to pass through the gates of time and their music seems a bridge over infinity, which projects the past into the future, where classical music wears the majestic and metaphysical robes of its past, albeit enriched by sonic and conceptual elements pertaining to our times.
In a certain way the sound canvases painted by this duo collect the works of the Renaissance Maestros, if the latter were in search of the golden proportion through the balance of the form, also CARisMA are looking for it through an immortal intonation, like the one with the A at 432 hertz. This intonation, which was the characteristic of the greatest exponent of Italian Opera, Giuseppe Verdi, paints the notes in a mother of pearl nuance and in a silky softness so that when they come out from their guitars they seem as if they had been dipped into the moonlight, by which were influenced the most intimate and inspired auteur melodies.
The ambitious research of the proportio aurea through music mathematics masterfully melts with the sophistication of the duo arrangements, and through a sublime technique that never exaggerates, that never is an end in itself, excites and makes all of us dream, without any distinction. This is the power of music, a universal language that can communicate straight with our souls, that leads us to leaf, through the sense of hearing, the pages that give shape to the canon of beauty.
The fingers of the duo chisel complex sound statues like Michelangelo’s, enriched with fast cascades of notes that then slow down in a flutter, to settle then in a clear harmonious pond, where sensitive melodies are floating, in which each note seems to have been written on the pentagram with the sensitive ink of the heart.
CARisMA, poetry in music where beauty, harmony and sensitivity are narrated in prose by two guitars…it is impossible not to feel moved by all this. 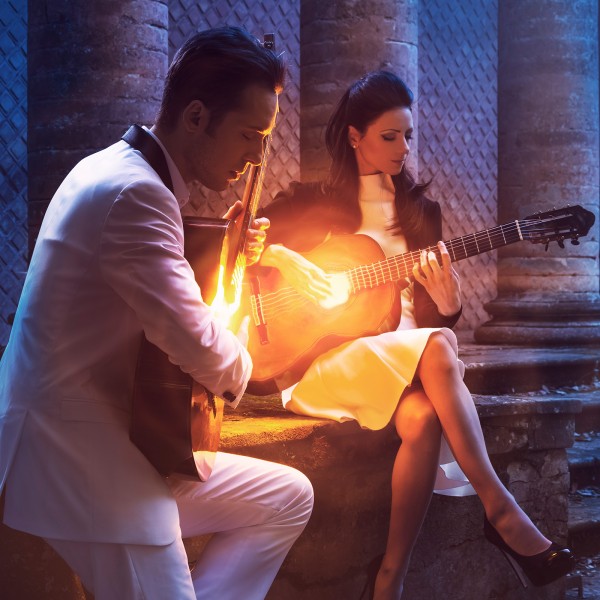 CARisMA is the fusion between the remarkable classical guitarists Magdalena Kaltcheva and Carlo Corrieri.

After successful careers as soloists, the two decided to expand their repertoire and merge their unique sound and musicality into CARisMA. The duo is recognized for their outstanding arrangements and compositions as a result from their innovative way of playing the classical guitar.

CARisMA’s art has garnered much attention by Andrea Bocelli, who was astonished by their arrangement and performance of the Overture from ‘The Barber of Seville’ by Gioachino Rossini. He invited the duo to perform on his tours around the world. CARisMA is the first and only artist to ever perform as an opening act for Andrea Bocelli.

The collaboration with the beloved Tenor led the duo to perform at some of the world’s most famous venues such as the Madison Square Garden in New York (in front of former US President Bill Clinton and former secretary of state Hillary Clinton), the O2 Arena in London, the Mercedes Benz Arena in Shanghai, the Lanxess Arena in Cologne, the Telenor Arena in Oslo, the Paolo Sixth Concert Hall in the Vatican City, the iTunes Festival in London (which was broadcasted worldwide with over 120 million viewers) among many others.

In June 2014 CARisMA embarked on their first solo tour in China, performing at some of the most prestigious concert halls in the country, such as, the Shanghai Oriental Arts Center, Tianjin Grand Theatre, Beijing Concert Hall, Qintai Concert Hall, Xinghai Concert Hall, to mention a few.

In 2012 CARisMA released their debut Album ‘Confessions’, which featured film music from ‘Chocolat’ by Rachel Portman, alongside a selection of jazz and classical standards.     “Confessions” got enormous recognition on international radio stations such as RAI 1, RAI 2, RAI 3 in Italy, Antenne Brandenburg in Germany, Bulgarian National Radio, NPR Radio in the US, to name a few.

In 2017 CARisMA released an EP- Album called ’Classic Poptronica’ which they recorded in their own Recording Studio. The album reached the TOP 40 on the iTunes Charts in Brazil placing #38.

After taking private lessons in Bulgaria, she began to study with Csaba Szekely in Aachen, Germany. From 2000 until 2004 she was a student at the special college of music, “Schloss Belvedere” in Weimar, Germany.

In October 2004, when she was only 16, she was accepted to study with Prof. Jürgen Rost at the prestigious University of Music “Franz Liszt” in Weimar. Kaltcheva graduated with the highest marks and received her Diploma in July 2009.

In 2011 she received her Master degree at the University of Music in Cologne with Prof. Hubert Käppel.

For her musical accomplishments she has received a master guitar from the ‘Soroptimist International Club’ and a scholarship from the ‘Freundeskreis zur Förderung der Bochumer Symphoniker’. Magdalena has been promoted as well with the Lions-Club Colonia scholarship for high talented students of the University for Music Cologne in October 2009.

In the Year 2006 she recorded her first CD “Sonatas” with the NCA Records, Hamburg.

The selection of works performed on this CD from Scarlatti, Paganini, Brouwer and Dyens contain a variety that afford a technical musical ability of the highest level and the same time a gentle feel of sound and musical sensitivity.

He began his musical studies at the age of 7, exhibiting extraordinary musicality and talent from a young age. At the age of eight he began to perform in concerts and won numerous national and international competitions.  He was recognised by national newspapers as ‘the Italian prodigy of the guitar’.

Corrieri was invited to perform at guitar festivals and to give concerts in Italy and across Europe.

Corrieri has taken part in Master Classes with some of the most important guitarists in the world like Eliot Fisk, Manuel Barrueco, Christopher Parkening, Sharon Isbin, David Russell and Tilman Hoppstock.

Grammy award winner David Russell spoke of him as a ‘musician with exceptional technical skills and a great interpretative power’. Sharon Isbin described him as one of the most talented guitarists in the classical music scene.

In 2005 Carlo took part in the summer guitar festival at Montana State University (Bozeman). It was organised by the world-renowned guitarist Christopher Parkening, student of Andrés Segovia, who after listening to Corrieri did not hesitate to contact, the Associate Justice of the Supreme Court of the United States, at the time, Sandra Day O’Connor, to let her know about the concert Carlo would perform in her honor. The performance was such a great success that as a result Christopher Parkening awarded him a prestigious scholarship at Pepperdine University in Malibu (CA).   There he continued to refine his skills in music and guitar playing.

Parkening wrote in an interview that “Carlo is one of the biggest music talents of his generation, has an inborn musicality and innovative technique”. Carlo was the first of Christopher Parkening’s students to perform at the famous radio show of young talents ‘From the Top’, broadcasted by NPR Radio and directed by Christopher O’Riley. During the years at Pepperdine University, Carlo had lots of opportunities to make himself known in the California area, performing for the Italian Consul General in Los Angeles, Diego Brasioli, the President of the Italian Institute of Culture in California, Francesca Valente, the 16-time Grammy Award Winner and executive pop music producer Humberto Gatica and songwriter Tony Renis.

Thanks to Tony Renis, Carlo succeeded in having a meeting at the home of international Star Tenor Andrea Bocelli to be heard. It was this meeting that led to further collaborations with the Italian Maestro.

Talk with the 432Player app CEO´s

What is a cookie and what is its purpose?
A cookie is a small file that is sent to the browser and saved on your device when you visit a website.
Cookies allow the site to function efficiently and improve its services, in addition to providing information to the site owner for statistical or advertising purposes, primarily to personalize your navigation experience by remembering your preferences (for example, remembering the language and currency you set, in order to recognize you at the next visit, etc.)

Which cookies do we use and for what purposes?
Our website uses various types of cookies and similar technologies, each of which has a specific function. Below is a table explaining them.

Functional cookies
These cookies allow, based on your express request, for you to be recognized when you subsequently access the website, so that you do not have to enter your information each time (for example: “Remember me”).
If you have added items into your Shopping Bag and closed the session without completing the purchase and without eliminating those items, these cookies allow you to continue the shopping experience the next time you access the website (within a limited period,) finding the same articles that were selected.
Functional cookies are not essential to the functioning of the website, but rather improve navigation quality and experience.

Analytical cookies
These cookies are used to prepare statistical analyses on the navigation methods of our website’s users. We treats the results of these analyses anonymously and exclusively for statistical purposes only if the service provider uses the cookies to connect to the browser used or other devices used to navigate on the website. The website uses certain third party services which, entirely independently, install their own cookies.

How can I disable cookies and manage my preferences?
The majority of browsers are configured to accept, control or potentially disable cookies through the settings. We nevertheless remind you that disabling navigation or functional cookies may affect the functioning of the website and/or limit the service we offer.

For more information on cookies and to manage your preferences for third party profiling cookies, please go to http://www.youronlinechoices.com. To disable analytical cookies and prevent Google Analytics from collecting data on your navigation, you can download the add-on from your browser to deactivate Google Analytics: https://tools.google.com/dlpage/gaoptout.